Standard and Multiple Trunk are terms commonly used to describe the trunk structure of desert adapted trees. These terms are used casually in conversations among landscape professionals and are routinely used in construction documents. While such terms are liberally used in the desert southwest within the design, construction and horticultural communities there is not generally agreed upon definition or description that relates the terms to actual tree forms. Clear, precise terms are needed if growers, contractors and landscape architects are to successfully and effectively communicate their individual tree needs.

The American Association of Nurserymen publishes, "American Standards for Nursery Stock" which attempts to set standards and define terms for nursery professionals. These definitions are heavily weighted toward tree species, in commercial nursery production, that are commonly found growing wild in woodlands from the eastern to northwestern United States. Hortus defines standard as a woody plant cultured over a few growing seasons to replicate a small tree form. In many tree species, including desert species, we see gradations in trunk characteristics ranging from true single trunk trees (e.g. Acacia stenophylla) to clump form multiple trunk trees (e.g. Cascalote, Caesalpinia cacalaco, and to some extent Desert Willows Chilopsis linearis and Chaste Tree, Vitex angus castus). Many terms have been used to describe the intermediate tree forms between these two extremes. Examples include low breaker, naturals, triples and others. The variety of terms and the absence of general definitions have contributed to confusion both within design studios and landscape construction sites. Florida's Nurserymen and Growers Association in 1955 implemented some of the original grades and standards adopted by nurserymen. Setting grades and standards for nursery stock was instrumental in better communicating the landscape designer's visions to the buyer and seller.

All these efforts, while well intentioned, have met with limited success. Given the diversity of regional landscapes, the enormous number of plant species offered for commercial sale nationally, the range of differing sizes, shapes and containers offered for, developing widely acceptable and useful standards is a formidable task.

The simplest and most descriptive terms for the commonly planted desert trees in today's landscape palette are "single leader" and "multiple" trunk (or leader). It is clear that the word "standard" refers to a "single leader trunk" tree with the initial scaffold branches originating at three to six feet above the soil line. The distance to the first branch will vary depending upon the proportions (ration of height to width) desired by the landscape architect, the particular landscape setting where the tree is to be installed, the natural growth habit of the tree specie and the production methods used by the grower (for example keeping temporary branches). It would be clearer if such trees were referred to as single trunks since this is what they are. Since the natural form of the vast majority of desert adapted trees is some variation on a multiple trunk form, greater detail is needed in describing these forms. In some respects the word "multiple trunk" seems to over simplify the assortment of forms to be found within these species. These variations include clump multi, shrub multiple, low breaking multiple, and low breaking single.

The diagram below shows the most popular forms of deserts trees and a recommended term to use when specifying these forms on landscape plans or when ordering trees. 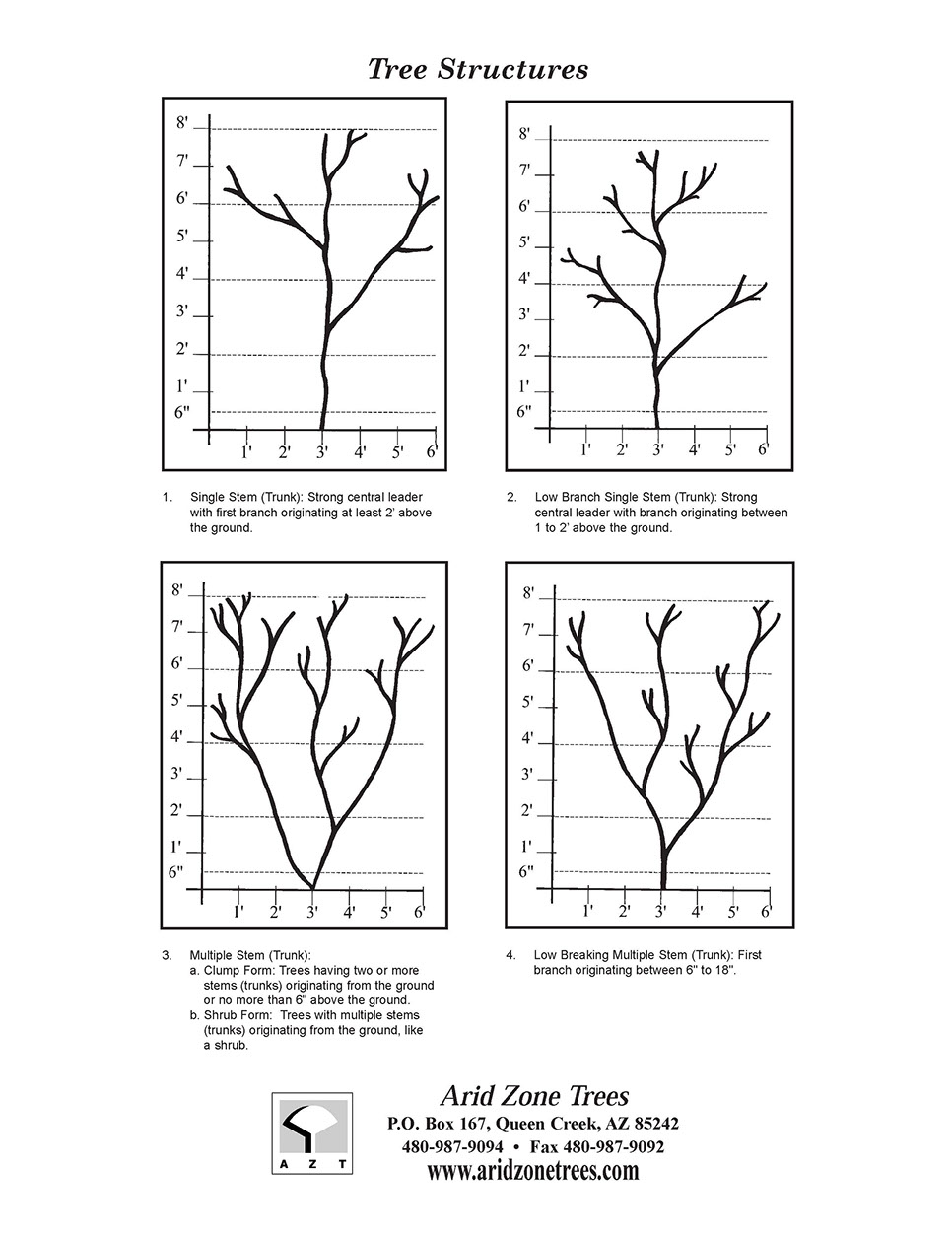