Many horticultural professional and home gardeners get concerned when they see sap oozing from the branches or trunks of trees in the landscape.  While it is not a common occurrence it does happen for an array of reasons and not all of them are detrimental to the long-term health and survival of trees.  Ask any Vermont Maple Syrup producer.

The comparison of trees’ vascular system and sap to blood and blood vessels in our bodies is a bit over used, but a worthy analogy.  Like our blood vessels, the vascular system in a tree is a dense network of tiny tubes that transport essential fluids from one part of the plant to another. The two parts of this conducting tissue are xylem (which moves water and mineral nutrients, found in the soil, through the roots to the upper portions of the tree) and phloem (which conducts sugars manufactured in the leaves to the other parts of the tree, including back to the roots).  In trees, these tissues are located just beneath the surface or bark of trees.  Any breaks or imperfections in the bark tissue can lead to fluids leaking from the vascular system and appearing as clear to amber color, sticky globs of sap.

Most often we see sap oozing during the spring and early summer, as the growing season gets underway in the desert southwest, when fluids begins to flow within the tree. Almost any injury to the bark can lead to sap escaping. Examples include the use of pruning and trimming tools, bird feeding (particularly woodpeckers), insect feeding and egg laying, sun injury, and vandalism. Probably the most overlooked source of sap leakage is the rapid expansion or radial growth of the trunk and branches in response to optimal growth conditions.  As you inflate a cylindrical balloon, it increases in both length and girth or width at about the same rate. Tree trunks and branches grow in the same way but tree bark is not as elastic or forgiving as the rubber of a balloon.  If radial growth (increase in caliper) exceeds the growth of the bark weak areas and crack (microscopic to several inches in length) can occur.  These cracks become areas where sap can leak.

The good news about the appearance of sap is that it is an indicator of active growth in both the xylem and phloem and a general sign of vigorous growth. Or put another way that both the canopy and root system of the tree are growing vigorously and sap is moving. It is also an indicator that there are injuries or imperfection in the bark and you may want to explore further to understand their causes and preventions.

The association between sapping and woodborers is incorrect, at least within the majority of landscape trees grown in the desert southwest.  With the exception of the Palo Verde Borer, that feeds exclusively underground, aboveground wood boring insects only attack and feed on dead wood.  Some of the injuries mentioned above can lead to the death of tissues that can be colonized by woodborers and perhaps this is the source of the confusion.  There is also a disease of citrus where excessive and conspicuous gumming or sap release along the lower trunk is associated with Phytophthora Root Rot.  This is a very unique situation limited almost exclusively to citrus.

1. The flow of liquids within trees (through the xylem and phloem) is critical to growth and development and is highly active in the spring and early summer.

2. The appearance of sap is usually associated with injuries or imperfections in the surface or bark of trees and is not inherently an indicator of poor health or disease.

3. The most overlooked source of sap leakage in desert trees is the rapid expansion or radial growth of trunk and branches in response to optimal growth conditions.

4. When sap is observed, determine the source or causes of the injuries.

5. If injuries are related to physical activities around the tree (pruning, vandalism) suggest reducing the source of the injury.  Avoid growth cracks by applying water and fertilizer on a regular schedule during the growing season to promote gradual, continuous, vigorous growth.

6. Insects, including tree borers, may be associated with sapping but are typically not the cause. 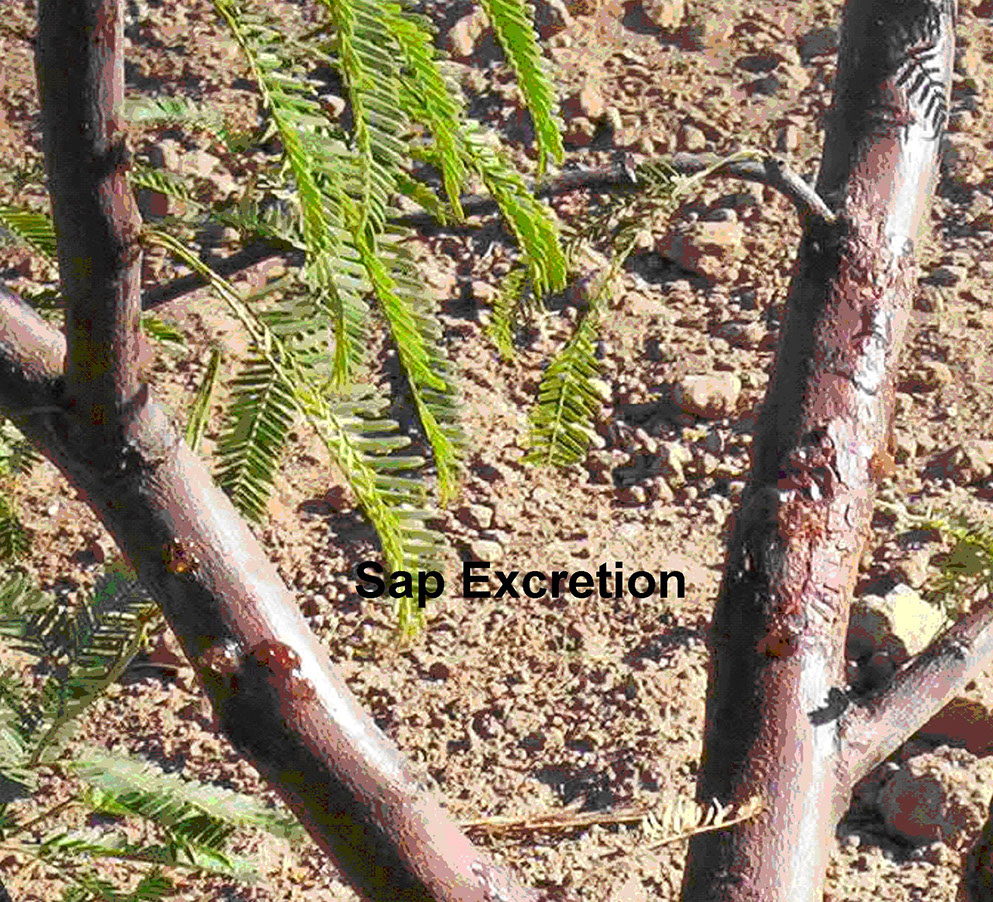