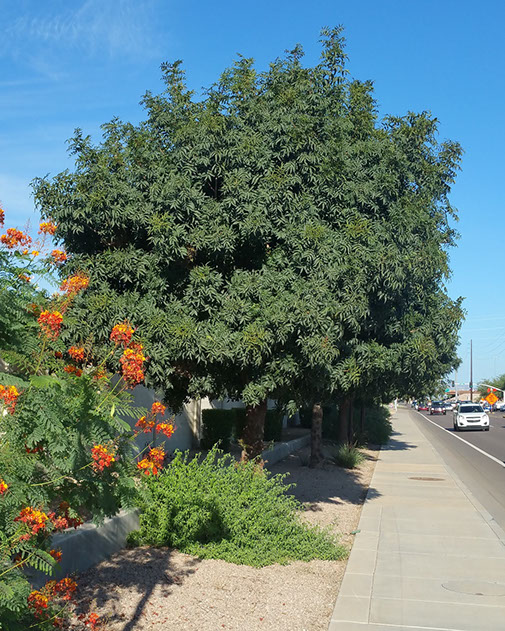 Above is male tree in streetscape, below is female tree with seed 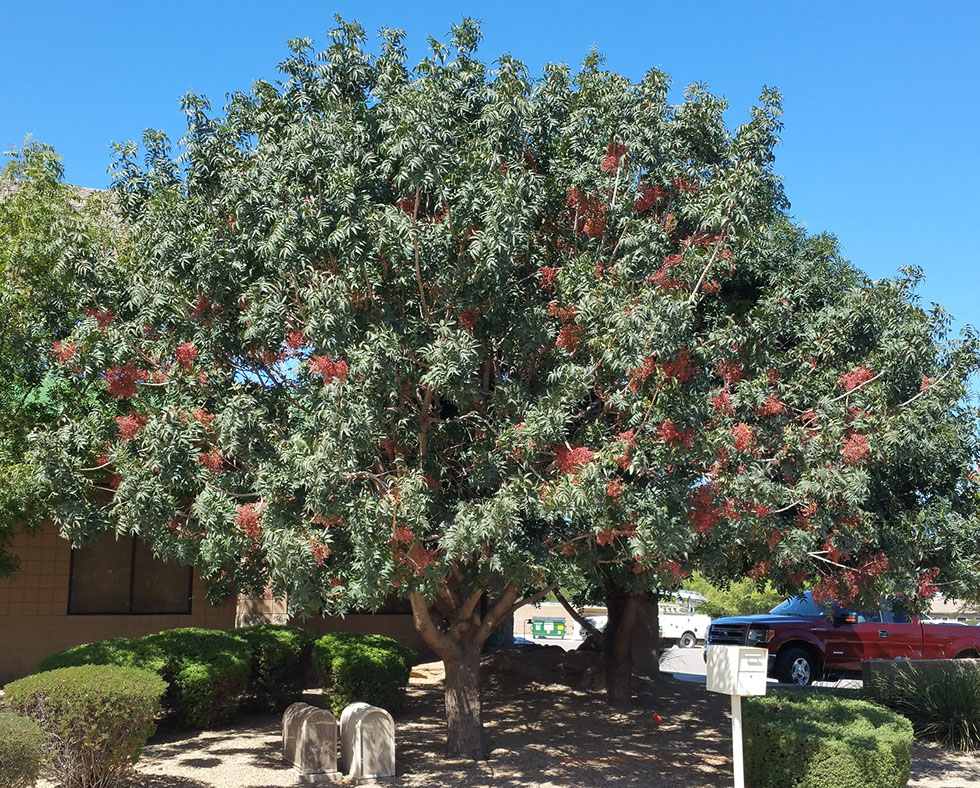 “Red Push” Pistache is a hybrid of Pistacia atlantica and P. integerrima that bring hybrid vigor to the growth and development of this deciduous shade tree. The new foliage emerges reddish in color and gradually turns rich dark green upon maturity, rather like Photinia, hence the common name “Red Push” (the nickname was created by Arizona Pistachio Nursery to distinguish from commercial, fruiting varieties). Well adapted to desert growing conditions (established trees can be found in central and southern Arizona, the California deserts, Clark County Nevada and across Texas) it is cold hardy to 0 degrees F, favors full sun and grows to a mature size of about 40 to 60’ tall and 40 to 60’ wide. “Red Push” are dioecious, meaning there are separate male and female trees, with male trees producing anthers and females producing incomplete flowers. Populations of trees grown directly from collected seed will contain both sexes. Trees produced by cloning (vegetative propagation) could use male tree source wood and eliminate flowers and seed. Unlike Pistachio producing trees, these seeds are small and rather inconspicuous.

Reports vary with regard to growth rates, reporting both moderate and slow growth. This difference is likely the result of slower growth of young trees (first 2 years) and more moderate growth as trees establish and mature. Experience in the Phoenix Metro area suggests that trees grow at a moderate rate with adequate irrigation, in full sun and well drained soils. Younger trees, initially, form a very open canopy with somewhat randomly distributed branches developing about 4’ above the ground. Thoughtful pruning, at this stage of growth, helps optimize canopy structure and shade as trees mature.  The leaf canopies, of maturing trees, are broad, dense and generate significant shade with uniquely rich, dark green leaves. Established trees are highly drought tolerant and are non-allergenic.

When placing trees in the landscape, consideration should be given to the impact of shading on understory plantings like turf and flowering shrubs. The dense, broad canopies are excellent for wind breaks, privacy and summer climate buffering. Younger trees exhibit very open canopies and do not reflect the form and structure of maturing specimens. Proper pruning of younger trees pays great dividends as trees mature and canopies become increasingly dense. Flowers are inconspicuous and female trees produce small seeds not typical fruit. The most commonly available varieties of “Red Push” are seed selections from U C Davis’ UCB #1 * that are resistant to the fungus that causes Verticillium Wilt, a disfiguring and potentially fatal soil-borne disease to Pistache.

The abundant summer shade is a prelude to the wonderful fall color displayed by “Red Push” as cool temperatures return and trees begin going dormant and losing all their leaves for the winter months.  The depth and intensity of fall colors (mostly yellow, orange and red) will depend on how quickly cold temperatures arrive and the duration of these temperatures. In mild falls, in much of the southwest, leaves will generally fade to yellow and be shed over the winter months. On those years, or in those regions, when fall brings an abrupt, sharp drop in temperature, red and orange leaves dominate the canopy.

“Red Push” are typically planted as single specimens, as streetscape planting, perimeter plantings and in small groupings (that accommodate the mature height and spread). These trees bring a rich dark green and deep shade in summer and are a delight to the eyes in fall.

* Variety UCB #1 was developed by the University of California, Davis as a rootstock for commercial Pistachio production to protect trees from the fungus that causes Verticillium Wilt. 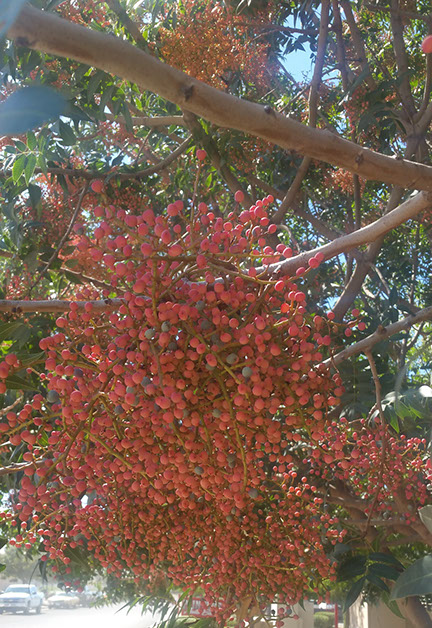 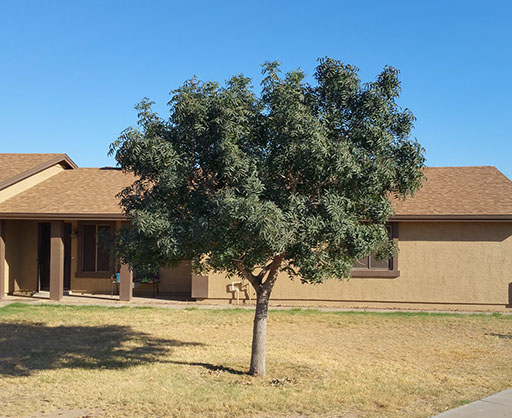 Above photo of tree in summer non-irrigated bermuda grass

Above photo: used as a street tree 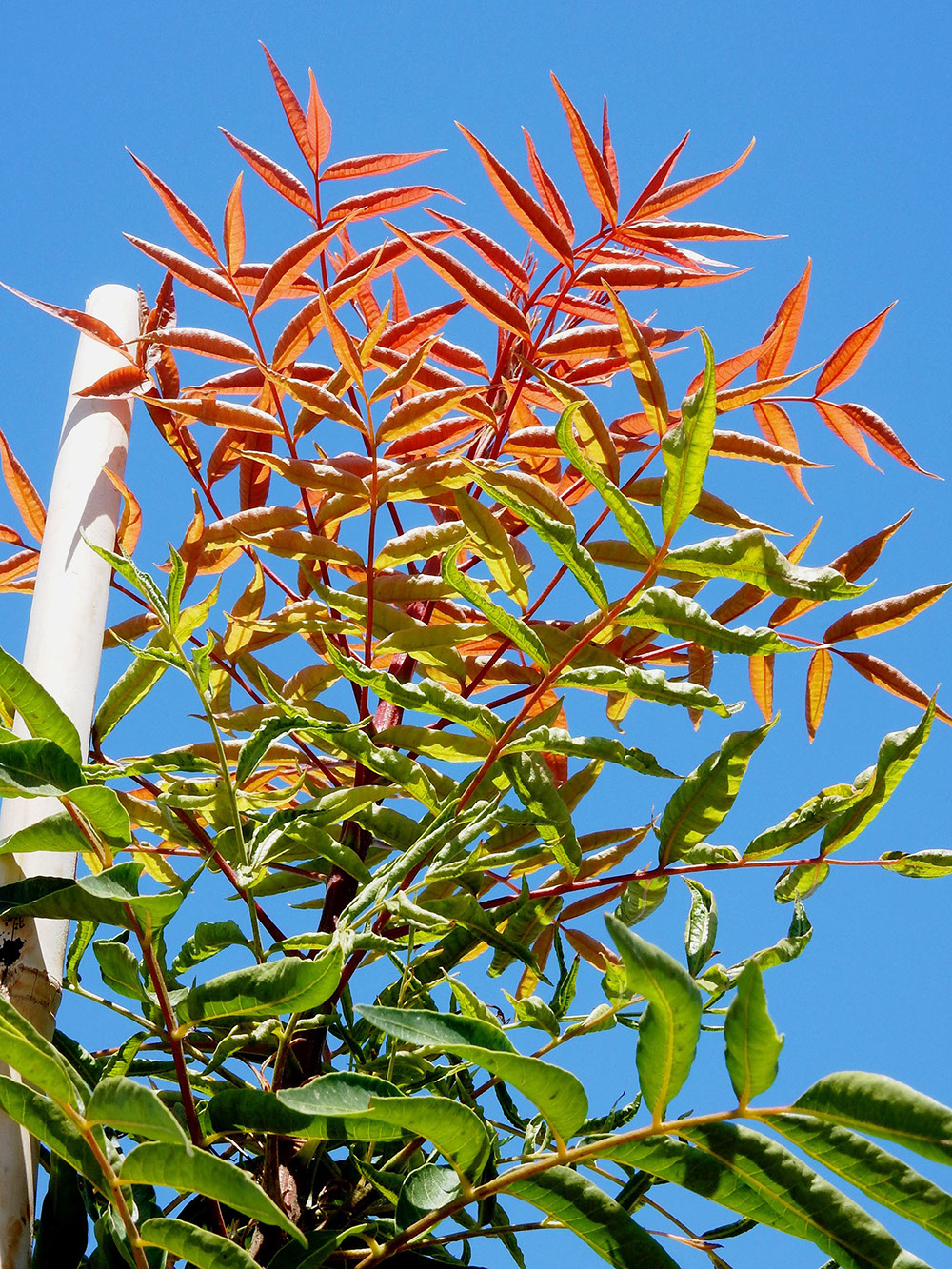