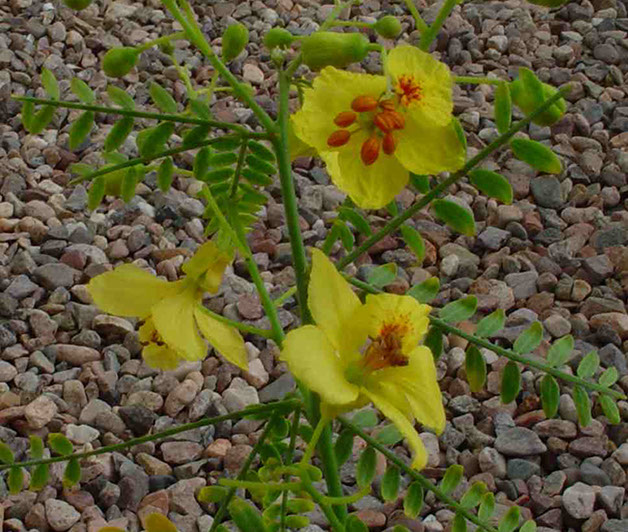 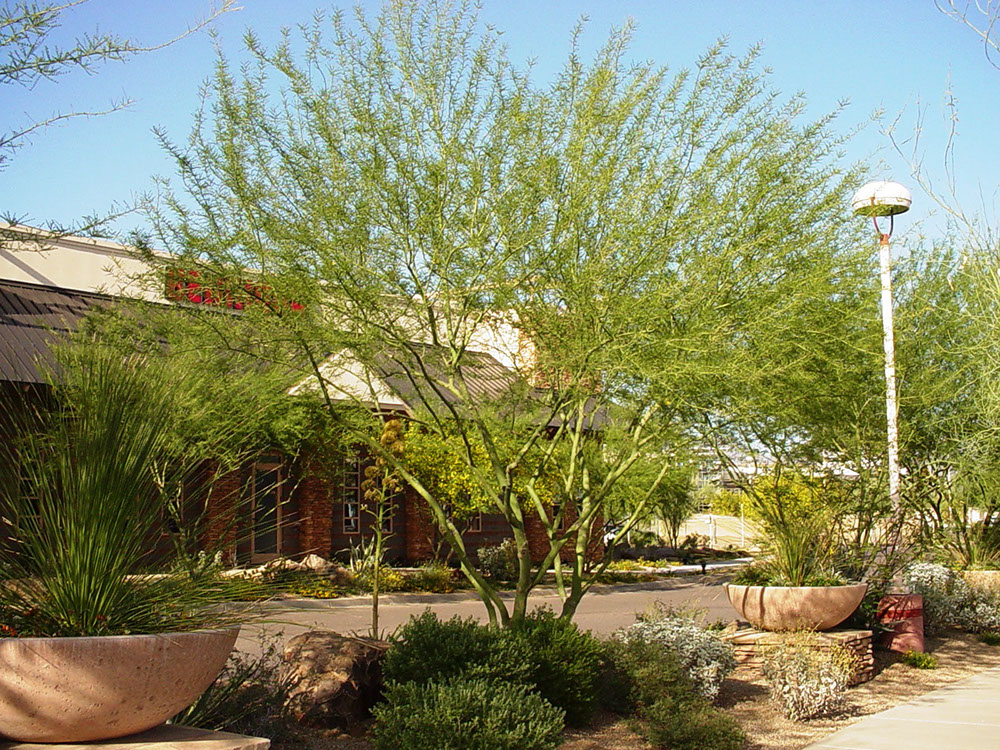 Nothing heralds the arrival of the desert spring (and in some years 100 degree temperatures) as brilliantly and conspicuously as the blooming of the Palo Verdes. With a succession that includes Blue (Cercidium floridum), Foothill, Mexican and Sonoran, Palo Verdes color the desert a brilliant yellow from spring to early summer. Other than Mexican Palo Verde (Parkinsonia aculeata) all the Palo Verdes are popular and widely used landscape trees. All these species are so closely related botanically that hybridization between species is quite common in native and nursery environments. In the past this hybridization went largely unnoticed or was mistaken for genetic seed variation within a single species. The potential for hybrids to offer advantages like increased vigor, greater cold hardiness, enhanced flowering and absence of thorns eventually brought them to the attention of horticultural professionals.

In the late 1970's Mark Dimmitt with the Arizona Sonora Desert Museum (ASDM) began noticing Blue Palo Verdes that exhibited characteristics suggesting they were hybrids of other Palo Verde species. He collected and planted seeds from the assorted trees he had observed and began evaluating them. By 1981 he had identified a thornless seedling as clearly superior to the others collected. Careful evaluation of the genetic composition of this hybrid, named 'Desert Museum', revealed it to be a complex hybrid having genetic characteristics from Mexican, Blue and Foothill Palo Verde. Dimmitt suspects that 'Desert Museum' gets it vigorous growth, sturdy, upright branching habit and bright flowers from P. aculeate, and its small delicate leaves from the Cercidium species. Trees have tolerated temperatures of 15 degrees without damage in Tucson. The most remarkable and unique feature of this hybrid is the absence of thorns. Flowers are slightly larger than those of P. aculeata and other Cercidiums and trees have been observed to flower abundantly as early as mid-March in southern Arizona with intense, full bloom lasting into late spring and early summer. Intermittent flowering can continue into the mid to late fall. Pruning and staking is best done during the growing season when the trees limbs are more flexible. The v-shapes branching, thornless growth and ample shade make Desert Museum a pedestrian friendly desert adapted tree that could be used in a wide array of landscape applications.

Arid Zone Trees makes selections from thousands of trees propagated from seed. Only Individual trees having the most desirable physical qualities (branching habits, leaf color, leaf canopy, and flower color) and sound horticultural characteristics (rooting, cold hardiness and growth rate) are selected for further study.  These trees are then cloned (vegetatively propagated) and planted at our nursery for evaluation.  Only the best of these trees are then placed in cloning production and are designated Variety 'AZT'.  Since no one single selection of any desert tree specie is best adapted to all landscape applications, we continually search for new additions to our Variety 'AZT'.

Foster the development of a more dispersed root system and reduce the risk of wind throw by arranging irrigation emitters at varying distances from the trunk to encourage roots to "seek out" water and nutrients.  Irrigation emitter arrangement along with other information on irrigations practices for desert trees can be found at Irrigation Practices for Desert Trees.

Prune as needed to reinforce the structure and form of the tree. Periodic thinning is the most desirable method of pruning. Avoid hedging or heading back desert species, as this will only stimulate excessive branching. Do not remove more than 30% of the canopy during the summer as this can lead to sunburn injuries that can later be invaded by wood boring insects. Always use clean, sharp tools that are cleaned regularly in a 10% solution of bleach. For detail pruning guide see Pruning Desert Trees.

Periodically insect pests can be a problem on some desert trees.  On young trees, insect infestation can slow typical seasonal growth. Inspect trees during the growing season for common garden sucking insects such as aphids, thrip, whiteflies or psyllids. During dry months, (May and June) in dusty conditions, spider mites can appear. Monitor for infestation and apply controls as needed. Spray applications of water or water and Safer Soap give short-term control (3 to 7 days) for small insect population. For heavy infestation or longer control use federally registered insecticides. A contact insecticide application will kill existing adults. An application with a systemic soil drench will provide 8 to 12 weeks control for any post application insect hatchings or migration of insects. Before using pesticide for the first time or on new plants or cultivar, treat a few plants and check for phytotoxicty. Always read label and follow label instruction before using pesticides. For pesticide control recommendations contact a licensed pest control advisor.