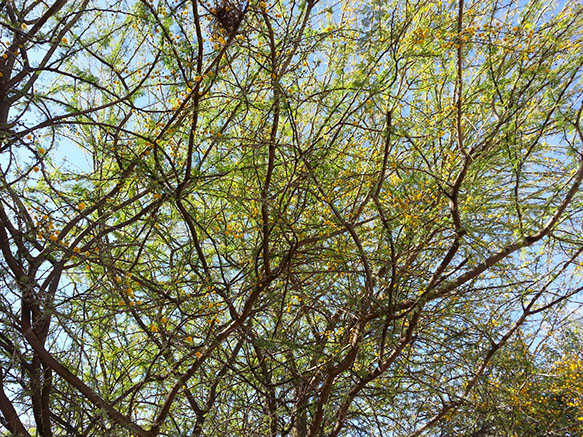 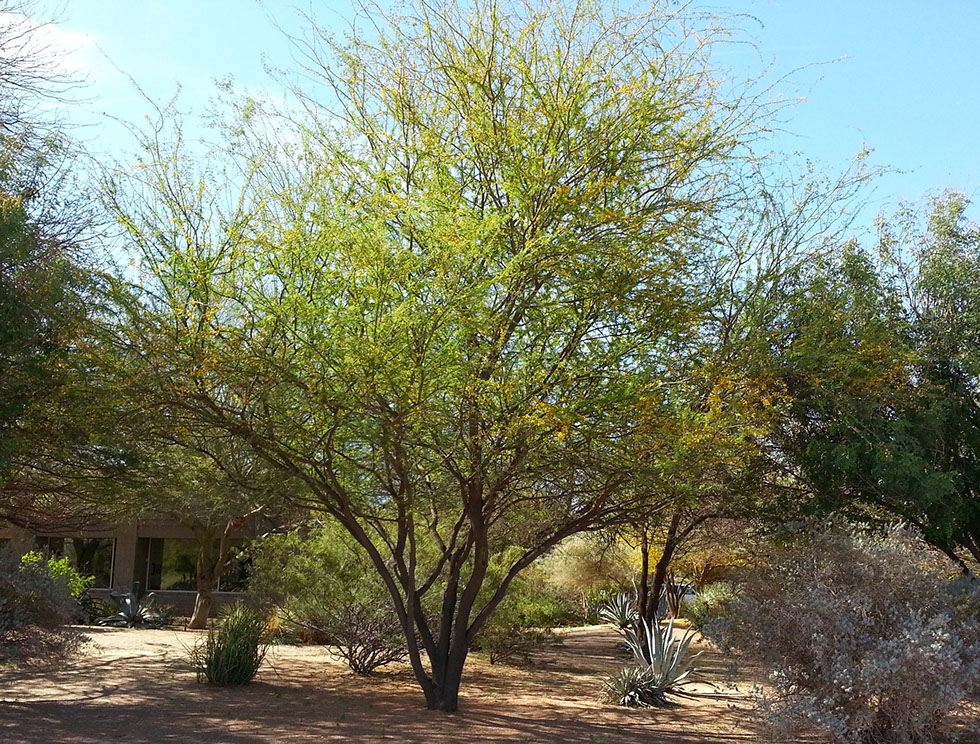 Twisted Acacia is native to the Chihuahuan desert of southern Texas and northern Mexico. Along with the common name Twisted Acacia; A. schaffneri is sometimes called Wheat's Acacia acknowledging the introduction of this specie to the southwest by renowned Phoenix landscape architect Jim Wheat. Its botanical name is derived from Wilhelm Schaffner, a German dentist and botanist who settled in Mexico City in 1856. The finely divided leaves of this tree are set close together on short petioles that originate, densely all along the branches. As a result of this unique leaf habit, the gnarled and twisted branches appear fuzzy and lacy green, beginning in early spring. The dense layer of leaves/leaflets obscure small, numerous thorns that grow along the branches, making them nearly invisible. Branches overlap and interweave to create an unusual, graceful branch canopy. Care, patience and seasonal pruning are needed to produce mature specimens that exhibit the sculptural, twisted branches that give this tree its unique charm. They can be grown as single, low breaking or multiple trunk forms, with the low break and multiple being the most commonly used.

It has a moderate growth rate and in spring produces bright, sulfur yellow, ball shaped flowers, borne singly or in clusters, densely packed along the branches (in a fashion similar to the leaves). Flowers are mildly fragrant. Young trees will require pruning to achieve desired form. Once the mature form is established, little additional pruning is needed. With proper water, in  a sandy loam soil, trees mature to 20’ to 25' tall and as wide with trunk calipers exceeding 12" in diameter in mature specimens. Twisted Acacia tolerates a wide range of soil types, thrives in full sun and is hardy to 17 F.

The unorthodox leaf canopy and remarkable spring flower display make A. schaffneri an ideal focal point tree placed in a prominent place within the landscape. When used near walls, its woven branches cast intricate, lacy shadows and can be dramatically lit at night. The numerous thorns also make it an effective security barrier or perimeter planting. These trees have been used in streetscape settings, in plazas and at entry monuments.