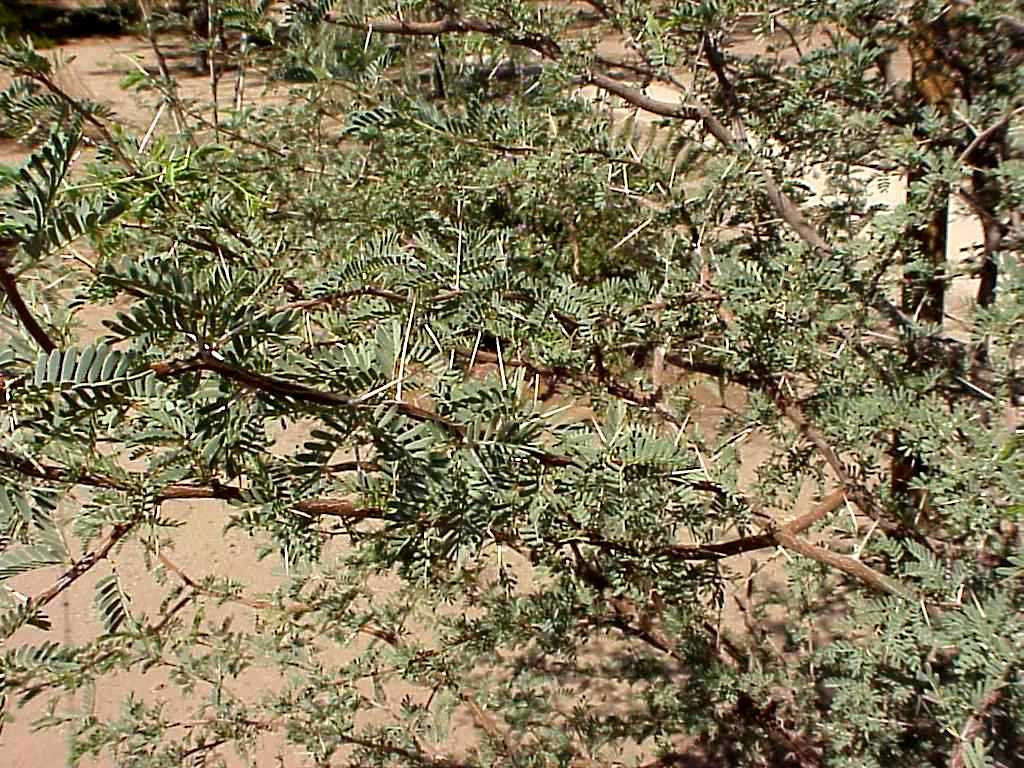 A new Acacia species being introduced into southwestern landscapes is Acacia erioloba (Camel Thorn or Giraffe Thorn) native to the desert regions of southern Africa. As an evergreen, Giraffe Thorn offers much needed shade year round while providing food and shelter for wildlife. Selections growing in Arizona appear to be cold temperature deciduous. Young trees have a generally upright growth habit but as they mature the canopy spreads to form a wide canopy that provides substantial shade. It is the dominant tree in the natural landscape of Namibia and Botswana, growing primarily along the banks and in the middle of river beds. Thorns occur in pairs along the trunk and numerous ball shaped yellow flowers appear in the spring. Trees are reported to be hardy to 20 degrees F. Most of the more popular desert adapted landscape species (Mesquites, Palo Verde, Sweet Acacias) tend to mature at about 25' to 35' tall and wide. Giraffe Thorn probably takes its name from its large stature. It typically grows to a mature height and width of 30 to 60 feet, leading one south African botanist to call it, "the king of trees in the arid regions of southern Africa." A. erioloba presents an opportunity to introduce a truly large stature tree into the southwest landscape palette that has a form and appearance that compliments our native desert species. Mature specimens could be used as a screen planting around the margins of a landscape, as a visual focal point or entry marker. The ultimate size of these trees should be taken into consideration when placing them in the landscape design. In natural setting the mature size of the tree is heavily influenced by the annual rainfall in the area. These observations suggest that the mature size of Giraffe Thorn trees used in landscapes settings could be controlled by effective irrigation management.

The seed pods are eaten by animals as fast as they fall and for cows that feed on the seed pods, there seems to be a noticeable increase in milk production. There are reports that certain times of the year the seed pod can be poisonous. The wood is very strong and resistant to termites and bores favoring the wood for wagons and mine props. For medicinal use by the natives, they would burn the bark and ground the by-product to remedy headaches and dried seed pods crushed to a white powder would cure ear infections.  The common name Camel Thorn is a mistranslation from the Afrikaans name, 'Kameeldoring', derived from kameelperd meaning giraffe. Early South African settlers named the tree 'Kameeldoring' meaning Giraffe Thorn.